I was the first batch of volunteers who sampled and entered the China Marrow Bank when it was established in 2003. I had a client many years ago. His son had leukemia. He spent more than one million yuan for treatment, but in the end, he died after more than a year of illness because he could not find a suitable match. This thing touched me a lot. Later, I saw reports in the media that donated bone marrow can cure leukemia patients. Our Nantong Red Cross Society also mobilized volunteers to join under the call of the China Bone Marrow Bank, so I went to sign up.

Since the registration and sampling and storage, I have been waiting for the successful matching. During this period, I received postcards from the China Marrow Bank every year, but after waiting for nine years, there was no successful matching patient until I received a call from the Nantong Red Cross Society on the evening of November 12 last year, saying that it was me and a patient who had low blood pressure. Distinguish the matching pattern. I was on a business trip at the time, and I immediately agreed to the donation request after I received the phone call, and went to the Nantong Red Cross Society to sign the "Consent for Remobilization" immediately after the call. After waiting for nearly six months, I went through high-resolution blood testing, physical examination, and re-examination. Until I finally received the notice, I was admitted to the hospital on May 18 and donated on the 23rd.

After this donation, I have gained a lot of inspiration:

First, the unremitting efforts made by our Nantong Red Cross staff to treat an ordinary leukemia patient, the serious and responsible spirit of work moved me. Since I received the notice, Dai Yamei, a staff member of the Nantong Red Cross Society, has been keeping in touch with me, taking me for high-resolution testing, physical examination, and re-examination, and accompanying me throughout the entire donation process; what moved me even more was when I entered the donation process. The day before, Secretary-General Meng Weihong of the Nantong Red Society made a special trip to Nanjing to visit. When I donated, Secretary-General Meng stayed by my bed and chatted with me throughout the process; President Ni Jin of the Nantong Red Society also sent this message during his busy schedule. Touching text messages of condolences; when I was lying down for too long and my hands and feet were numb, Master Zou, the driver of the Red Society, also came to my bed and massaged my hands and feet. All the staff of the Red Society treated an ordinary man so sincerely I was deeply moved by the actions of the donors.

Second, after I received the donation notification, I was moved by the support of the leaders and colleagues of the unit, especially the donation on the 23rd. The leader of Nantong Pangyuan Mechanical Engineering Co., Ltd. and the superior unit Shanghai Pangyuan Machinery Leasing Co., Ltd. Under the leadership of Chairman Chai Shaoyi, all the senior management in Shanghai made a special trip from Shanghai to Nanjing to cheer for me in front of my bed. The labor union also sent me condolences and repeatedly told me to rest and recuperate. I am touched by the support and concern of the leaders and colleagues of the unit, and please allow me to express my gratitude to them. 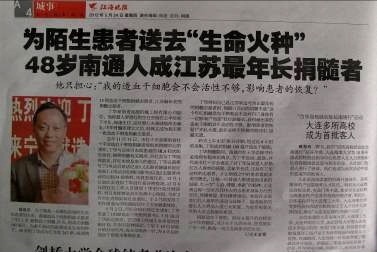 Third, I was deeply moved by the affirmation of my actions by the citizens of Nantong. After returning to Nantong, when I purchased the Jianghai Evening News with donation reports in my community, the shop owner recognized me and refused to pay for the newspaper. When paying, he said to me: You have donated bone marrow, so can't I show you a little bit of love? An ordinary citizen's awareness and recognition of donating bone marrow really warmed and moved me.

What touched me the most was that last night my colleagues in my unit said the most words when they welcomed me - tomorrow I will join the Chinese bone marrow bank and donate bone marrow. I went through the entire donation process myself, and donating hematopoietic stem cells did not bring me any discomfort, so I appealed to every caring citizen to join this caring group based on my own personal experience. Donating hematopoietic stem cells is not terrible, but a little bit of our efforts can save the life of a dying leukemia patient. Such a good deed deserves every caring citizen friend to do together.